This year’s Grand Gourmet Award had a new venue: the 5-star hotel Castell Son Claret, near Es Capdellà. Some 155 people attended (some of them flying to the island especially for the event) for an extraordinary gastronomic experience, created by eight superb chefs (seven from Michelin-starred restaurants).

The previous format of a sit-down dinner, followed by the award ceremony, was replaced for 2015 with a more dynamic event. Having attended a previous event, I preferred this new more informal format. On arrival at lunchtime on Sunday, June 14th, we enjoyed the welcome reception, with drinks and delicious finger food created by Martin, Caldentey, and Fosh. Castell Son Claret’s general manager Björn Spaude welcomed everyone to the event, and Daniyella and Band provided background music enhancing the relaxed ambience. 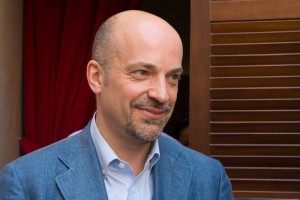 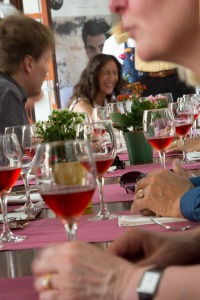 A different wine with each course.

Daniyella and Band in action at Castell Son Claret.

Guests gathering on the terrace for desserts. 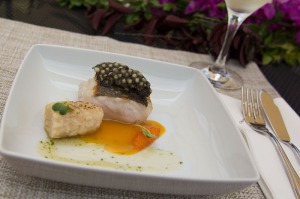 Guests – in groups of just over 20 people – then moved to a different location to eat each of the seven savoury dishes (each matched with a wine). Assisted by their own restaurant personnel, the chefs served their creations in locations including Olivera and Zaranda restaurants and kitchens, the Olivera lawn, and Sa Clastra – the beautiful courtyard at the heart of the hotel. Apart from the dishes eaten while standing in the gleaming contemporary kitchens, guests sat at long tables, enjoying the company of like-minded gourmets from different countries, before returning en masse to the Olivera terrace for some sweet treats.

The excellent music continued, and many of us took the chance to dance. The award ceremony this year was different, in that no ‘winner’ was announced: instead each chef received a framed certificate of participation, a bottle of wine, and enthusiastic applause.

The cream of Mallorca’s chefs – all winners. Macarena de Castro had had to leave before the presentation.

The formalities concluded, guests were able to take advantage of the Fever-Tree gin and tonic bar, and a Feurring BBQ – just in case they hadn’t already had enough to eat!  The barbie food looked good, but I couldn’t manage another morsel . . .

Congratulations to the whole team at Castell Son Claret, and all the chefs and their teams who took part. It was a Sunday afternoon we’ll remember for a long time.