At the end of a Mallorcan high-summer’s day – when the mercury has probably been flirting around in the upper 30s – nothing hits the spot like a gin and tonic. And Mallorca is the perfect place to try home-grown versions of the juniper-base spirit, with a refreshing choice of artisanal gins on offer.

I was eighteen when I started studying Spanish at evening classes in the UK; one of the first phrases I remember learning was ginebra y tónica. At that tender age, gin wasn’t even on my drinks radar, so it was a pretty useless phrase for me. When we moved to Mallorca, I realised quite how useless it was: I’ve never heard the drink referred to in Spain as anything other than gin-tonic.

Gin is definitely on my drinks radar these days, although it’s only an occasional tipple. When I do indulge, I like to try one of the new premium gins being distilled in Mallorca.

Last Friday we attended the 2nd Mallorca Gin Festival, at Pueblo Español in Palma de Mallorca. It was organised by the Palma-based drinks distributor Catavinos and Franklin & Sons (which has just launched a citrusy Mallorcan Tonic). Unlike their first Mallorca Gin Festival in December (at the snappily named Sheraton Mallorca Arabella Golf Hotel) for trade visitors, the summer version was open to all.

For an entrance fee of 15€ (10€ for each of the first 1,000 tickets sold), visitors could taste any of the 18 gins on offer and then have two gin and tonics, with their choice of gin. Three food trucks were there selling their respective specialities and a DJ provided the soundtrack to the evening.

Pueblo Espanol was an atmospheric setting

Pueblo Espanol is a microcosm of Spain’s architecture 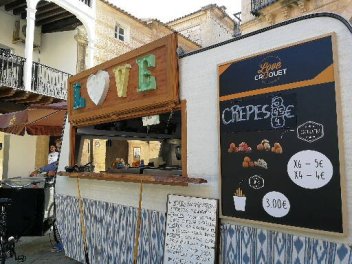 Street food to soak up the gin

Palma Gin – from a British-owned distillery in Mallorca’s capital

Llubi is a small Mallorcan village but produces artisanal gin

The event included two delicious G&Ts may by expert mixologists 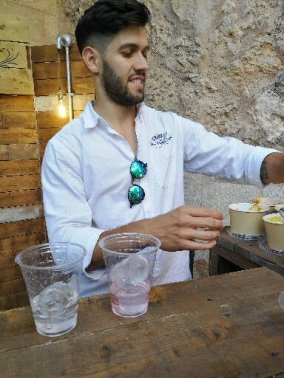 Compostable-plastic vessels were used for the G&Ts; small paper cups for samples.

Eleven botanicals go into this gin produced by winery Can Vidalet

It was a pity that Friday was probably the hottest day so far this summer, as the sunlit hours were not as busy as I expected. The festival started at 4pm but we deferred our arrival until 6pm. Hombre, we needed those delicious chilled G&Ts by the time we had wandered from stall to stall in the searing heat and selected which gins to have.

The benefit of fewer people being there at that time was that we could spend time talking to the distillers about their gins. We really enjoyed the event – if not the heat – and were grateful to end our visit with two delicious well-mixed G&Ts. We are already looking forward to the 3rd Mallorca Gin Festival.

As well as small-batch Mallorcan gins, there were a few others from further afield – even as far away as Bangkok (Iron Balls). The following were the local varieties on offer.

Can be shipped abroad (except to Sweden) by Fet a Sóller for personal consumption (not retail). This gin from Sóller contains herbal extracts from the Tramuntana. Their varieties include Taronja (orange) gin and the Mandarina gin liqueur – which is not sickly sweet like some liqueurs.

The Gin Eva distillery in Llucmajor is on a trading estate, but you’ll forget that fact once you’re inside (it’s open to visitors on Thursdays – see website for details).  Stefan and Eva Winterling are behind this successful business; originally winemakers, Eva is Catalan and Stefan is German and they have worked in wineries in several countries. They swapped wine-making in Mallorca for gin production to start Gin Eva in 2012, after making gin for the Mallorcan winery where they previously worked.

They make four gins and some artisanal spirits and have won several awards. My favourite Mallorcan artisanal gin is their La Mallorquina Olive Extra Dry Gin, made from the pomace of olives grown on the centuries-old Son Moragues estate in Valldemossa. Whenever I have a G&T made with this evocative gin, I think back to a wonderful day I spent at this estate in the mountains.

The distillery Pareis makes these relatively new gins on Mallorca’s distilling scene, in the village of Llubí, not far from Inca. Gin Mercant is described as super-aromatic, with notes of fennel, cinnamon, Mallorcan oranges and other sweet spices. Mascori is made with Mallorcan lemons, fennel and citric spices. It has a delicate fruity aroma with an acid touch. Both of these London Dry gins are best with a neutral tonic.

This gin is made at the winery Bodegas Can Vidalet near Pollensa. This gin is made with eleven Mediterranean botanicals, including juniper, fresh citrus fruits, rosemary, and other botanicals sourced from the Sierra de Tramuntana mountains. It was the first Mallorcan artisan gin (which was then called Can Vidalet) that we tried here.

The British-owned Mallorca Distillery in Palma has made a huge impression on the local gin market. Byron Holland is from Newcastle in the northeast of England and worked in the nautical sector before running a restaurant in Edinburgh. With roots put down in Palma de Mallorca – a city he’d visited during his career at sea – Byron started this business last year, with James Gibbons as his distiller. It’s been phenomenally successful and won several awards for its Palma Gin – in a distinctive white bottle. You can visit the distillery and even have a go at making your own gin there.

This Marratxí-based distillery is best known for its brandy. Its 1989 Club Suau is made up of members who have bought a barrel, kept in a locked cage-like section of its cool dark cellars. The distillery has recently returned to making artisanal gin, using the original recipe they used a century ago. Suau has been in Mallorca since 1851 and, if you have the opportunity, a visit to the distillery (which has a museum) is an interesting experience.