Marc Fosh is a chef I admire greatly, so I was pleased to have the opportunity to write about him for the Spring edition of Insiders Abroad magazine; the article is republished below. 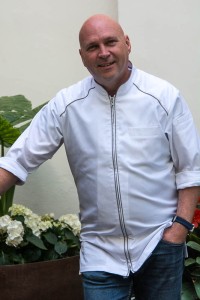 Marc Fosh on the terrace of his restaurant in Palma, Mallorca

Londoner Marc Fosh has achieved something no other British chef in Spain has done – gaining Michelin-star recognition for his cuisine in, not just one, but two restaurants.

This affable softly spoken chef’s extraordinary culinary career began modestly, in the early ‘80s, when he was a self-confessed “working-class kid”. He admits he was drawn to working in a kitchen by the camaraderie of being part of a team, rather than a great passion for food. The latter would soon come.

London’s The Greenhouse and The Chelsea Room (Carlton Tower Hotel) are on his CV, but he moved around to keep learning from different people. Working with Brian Turner, for instance, taught him the importance of coming out of the kitchen to talk to diners.

In the early ‘90s, Marc moved to San Sebastian, to immerse himself in Spain’s gastronomic revolution. There he worked alongside a developing young Spanish chef called Martín Berasategui … now one of the country’s culinary giants.

Next stop was Mallorca, as executive chef in the fine-dining restaurant of a British-owned country house hotel. His unique take on Mediterranean cuisine – based on fresh, high-quality ingredients, and a modern touch – won many fans and, in 2002, the restaurant was first awarded a Michelin star (which it retained while Marc still worked there).

In 2009 he left the star behind to open Simply Fosh, his own restaurant, within the Hotel Convent de la Missió in central Palma. Gone were the foams and fancy flourishes: “In the beginning, a star wasn’t the goal. It was about good food, with everything else stripped back,” he says.

The restaurant soon became a hotspot for local and visiting gourmets, also garnering enthusiastic reviews from food critics visiting Mallorca. The Wall Street Journal, Financial Times, and Condé Nast Traveller have all praised the restaurant and Marc’s cuisine. International recognition led to him becoming a brand ambassador for Braun, and being invited as guest chef to create first- and business-class inflight menus for Lufthansa. His consultancy work has taken him as far as Russia and China, and he was one of 400 of the world’s best chefs featured in the first edition of the compendium Where Chefs Eat (Phaidon).

Several young chefs who have worked in Marc’s kitchens over the years now have their own restaurants on Mallorca. Joan Marc, Andreu Genestra (Michelin-starred), and Adrian Quetglas are all establishments here owned and run by his former protégés: “It makes me feel proud to see these great chefs having their own success,” he says.

Simply Fosh evolved in an organic way and eventually ticked all the boxes for the Michelin inspectors, who awarded one star for 2015 and again for 2016. Last year Marc’s wife Iris joined him at work, as director of service and customer relations.

Marc’s Simply Fosh restaurant in Palma has been re-branded as Marc Fosh and his name will be the cornerstone of future projects. “I’ve been thinking about this for a couple of years, because ‘simply’ doesn’t really apply anymore,” he says. The hotel in which the restaurant is located has also invested in improvements and expansion with a view to attaining a 5-star rating. “So it’s a good time to re-brand and push forward.”

The restaurant is a Palma lunch hotspot and will continue to offer an innovative but affordable set menu. Dinner will be a more refined gastronomic experience, fitting of a starred restaurant. At night there’s a new culinary concept of three tasting menus, ranging from five to seven courses (one of the latter is vegetarian and has been “phenomenally successful”). The menus are based on fresh seasonal produce, and a wine pairing option is available. 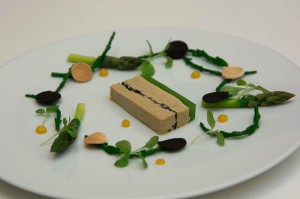 Marc has always looked for interesting ingredients for his cuisine and is often inspired by some of the herbs and spices found in health food stores that are not traditionally used in restaurant kitchens: “It takes you on a little journey,” he says, adding that his passion for highlighting certain ingredients “defines my cuisine.”

I ask Marc if he thinks he could have achieved similar success had he remained in the UK. “Yes, I do. I believe in my ability. Living in the Mediterranean for such a long time it’s bound to have refined my style, but I can see that my food would fit there.”

Thankfully he reveals no plans to leave Mallorca. “We’re lucky we have pretty good produce around us,” he says. Of the challenges of running a restaurant here, the biggest is probably staffing. “We’re in an itinerant trade, in many ways, so building good teams has been fundamental for me.” Marc Fosh’s carefully chosen team has the honour of working for, and learning from, the chef who is still the only Brit in Spain creating Michelin-starred cuisine.